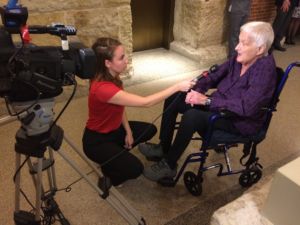 Kathleen Haines being interviewed by a Springfield reporter.

Dialysis patients and clinicians held a press conference at the Illinois State Capitol in Springfield on May 26 to oppose cuts to Medicaid ESRD payments proposed by Governor Bruce Rauner.

More than 5,000 people, or approximately 30% of Illinois dialysis patients, use Medicaid as their primary or secondary insurance. But all ESRD patients benefit from Medicaid dollars since they shore up the kidney care infrastructure, and permit facilities to operate in locations that might not otherwise be served.

In 2013, Illinois Medicaid reduced drug payments to dialysis providers. This resulted in an almost 40% reduction in overall Medicaid reimbursement for dialysis services. Dialysis providers were the only providers that received such a reduction. Following meetings withthe kidney community, the Medicaid agency agreed to a $60 primary partial rate restoration to offset the earlier cut. Unfortunately the Governor’s proposed budget would revoke this agreement.

The Illinois General Assembly was scheduled to pass a budget by May 31, but is now in “overtime” due to an impasse between the governor and legislature over Medicaid and other proposed cuts.