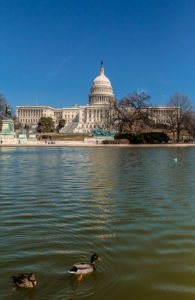 The 115th Congress has three remaining weeks to conduct business before the new Congress is sworn in on January 3, 2019. With so many outgoing Members and with Democrats taking over control of the House, some speculated Congress would get a lot accomplished during this lame duck session. That, however, does not appear to be the case.

Last week, following the passing of President George H.W. Bush, Congress quietly passed a spending bill, which will keep the government running through December 21, 2018. In order to avert a government shutdown, they will need to pass another spending measure before then—right now the biggest contingency surrounding a longer-term spending bill is whether it will contain funding for the border wall requested by President Trump. Other than a spending bill, other items Congress may consider are flood insurance, disaster assistance, judicial reform, Medicaid reform, and a farm bill.

Unfortunately, it does not appear as though Congress will consider much beyond these mandatory spending bills. We will continue to look for additional legislative vehicles where our priorities may be considered. In the meantime, we wanted to thank you for all of your efforts to educate Members of Congress on the potential benefits of care coordination for dialysis patients. We currently stand with more than 200 cosponsors of the Dialysis PATIENTS Demonstration Act.