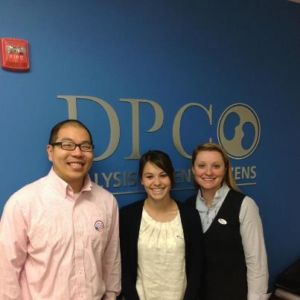 DPC staff excited to show off their voting stickers.

By Carrie L., Director of Congressional and State Relations

Well, the seemingly endless 2012 election is over, and the result is that not much has changed in Washington. President Barack Obama has been reelected to a second 4-year term and has returned to the White House to get back to business. He immediately faces several hugely important issues including the impending fiscal cliff, a combination of drastic spending cuts, tax increases and a reduction in the budget deficit that the Congressional Budget Office (CBO) has warned could lead to an economic depression if not addressed. But with the results of the election, the Affordable Care Act no longer faces the legitimate threat of repeal and, having been upheld by the Supreme Court, implementation will now move forward at the state level.

Democrats picked up some hotly contested seats to increase their majority in the Senate, where only a few months ago this was unexpected. They picked up seats in Massachusetts and Indiana while holding off tough challenges in many states including Missouri, Virginia and Montana. In Maine, Angus King was elected as an Independent but it is widely thought that he will caucus with the Democrats, meaning that he will align with the Democrats for committee purposes and for overall Senate organization. With King and Independent Senator Bernie Sanders (VT) who also caucuses with the Democrats, there will be 55 Democrats and 45 Republicans in the Senate in the 113th Congress. Kidney patients picked up an advocate in the Senate as Congressional Kidney Caucus member Rep. Tammy Baldwin won the race for the open Senate seat in Wisconsin!

Things remain status quo in the House of Representatives with Democrats likely picking up 2-4 seats (some races are still too close to call). Republicans will still control the House and Rep. John Boehner (OH) will remain the Speaker of the House. All four co-chairs of the Congressional Kidney Caucus were safely reelected and all but seven Caucus members will be returning to the House (3 lost, 3 retired and 1 left Congress to successfully pursue a different political office).

With the election over, the 113th Congress and control of the Executive Branch for the next 4 years is set. DPC has already begun strategizing priorities for next year even as we continue to advocate for kidney patients during the upcoming lame duck session of the 112th Congress.